End of May, beginning of June 2015, the Octopus Foundation has organized a pilot mission in Greece, more precisely in Fiskardo, at the Northern tip of Kephalonia island, in the Ionian sea.

The chosen site is the location of a Beaufighter bomber’s crash at the end of World War II. This site has no longer archeological value as the Greek locals have blown up the wreck several times in order to recover any useful material (starting with the aluminum) but the remains and the patrimonial value of the site makes it an ideal location for a pilot mission. 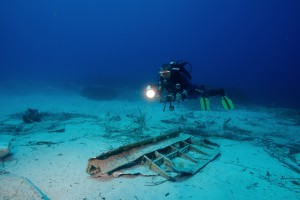 The Octopus Foundation managed to gather its first operational team of about 10 people for 15 days (sailors, divers, photographers, drone and ROV operators, computing specialist, sketch designer…) to accomplish a proper underwater research. Among others, we had to :

The results of this pilot mission have proved to be successful from the human and the technical point of view, and the information tools produced can be viewed here.