The ancient Greek city of Orikos, renamed Oricum by the Romans, is the home of a unique archaeological site that had never been excavated before 2005. The crew of the Octopus Foundation first documented the site in 2012 and followed archaeologists of the Geneva University and the Archaeology Institute of Albania. Two years later, the results have largely exceeded their expectations. Further research will be carried out by the UNIGE scientists, and the Foundation will once again be part of the expedition. We will take the opportunity to explore the mysterious waters of this lesser known European country.

Located on a rocky hill inside a military base, the archaeological site of Oricum has been cut off from the civilian world until the beginning of the 2000s. Still, the antique city has had a historically rich past. Among other interesting moments, it saw a major event in the Roman Civil War led by Julius Caesar. An event today still largely unknown by the public.

During the first two excavation campaigns (2012 and 2013), the archaeologists found an almost virgin site. Major discoveries were made: a public building with a unique architecture, a monumental fountain, one of the doors to the city, an intact tomb… 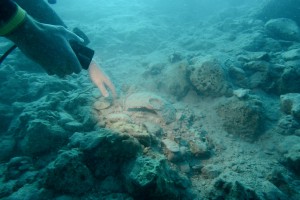 This autumn, the Octopus Foundation will once again assist the Swiss and Albanian archaeologists in their exploration. The Foundation’s main role will be to explore the underwater quarries. These important sites are situated along the Karaburun Peninsula, and their exploitation was most probably the main activity of the ancient port.