During the last winter season, the field crew of the Octopus Foundation met several times in the South of France, at the Étang de Thau. These trainings were scheduled in order to increase the efficiency of the underwater operations. The testing of tools in challenging conditions such as cold water and poor visibility was an excellent exercise. The techniques have to be drilled many times as to assure the success of the upcoming missions planned by the Octopus Foundation for 2016.

The crew focused its resources on delimitating and tagging an underwater zone (such as an archaeological or biological one), which is later photographed systematically in order to create a 3D model of the zone. 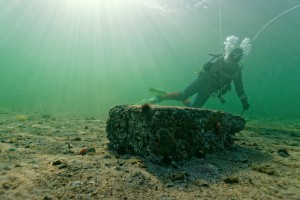 “These trainings are important because we learn to work with each other efficiently in different weather conditions and in underwater zones with various depths and seafloor configurations”, explains Ariel Fuchs, the Foundation’s operational director. “We now definitely have a better expertise of the many tools and equipment that will help us bring the underwater world to the public in new and exciting ways”, he concludes.