On the 26th of October 2016, Homerous, the iconic marine turtle of the Lampedusa Turtle Rescue center, was released in the Mediterranean Sea. This Caretta Caretta marine turtle was brought to the veterinary center after being wounded by a boat. The propeller hurt her lower back, paralyzing her two back legs. She is now swimming freely in her natural habitat. 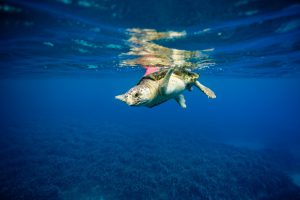 It was an emotional event for Daniela Freggi, the center’s director. “With Homerous’ release, it’s a part of me that is gone forever”, she explains. “But my happiness for her freedom is much greater than my loss. I truly wish her a long and happy life.” It was also an intense moment for the crew of the Octopus Foundation. “We gave back to the sea an animal that belongs to this ecosystem. It’s a turtle that we had been following for the past eight years. During this time, Homerous became a spokesperson for her entire species. Her story helped to raise thousands of people’s awareness. We feel proud for having the huge privilege of assisting and documenting such a unique event,” says Julien Pfyffer, the Foundation’s president and founder.

With the Octopus Foundation’s support, and with the data collected by the Radio beacon attached to Homerous’ back, the crew at the Italian center are able to follow their protégée. So, where did this loggerhead go? “After the first few days, when she stayed quite close to the island of Lampedusa, she took off towards the open ocean. These days, she seems to have settled in the waters off the coast of Tunisia, that are rich in jellyfish,” explains the director of the Italian center. “It’s an ideal environment for marine turtles.”

“To set Homerous free in such conditions is a dream come true, all thanks to the Octopus Foundation’s support. It was a pleasure to work with the whole team, and I am looking forward to our future collaboration”, concludes Daniela Freggi.