Octopus Foundation: understanding the marine turtles of the Mediterranean

During the last two weeks of July 2016, the crew of the Octopus Foundation will join Daniela Freggi, director of the “Lampedusa Turtle Rescue” medical center on the Italian island. Julien Pfyffer and his team will follow up on the medical devices that were financed and delivered by the Foundation, in order to better understand this 250-million-year old species, struggling today against possible extinction.

The “Lampedusa Turtle Rescue” center, founded in 1996 by Daniela Freggi, is a medical center fully dedicated to the rescue and surgery of endangered Mediterranean marine turtles. The Franco-Italian biologist spent the last 20 years of her life working to save these animals.

Last April, the Octopus Foundation brought its support to the veterinary clinic in Lampedusa with a 12’000 euros donation. This money was used to buy a microscope with a camera, a blood centrifuge used for special analyses of the animal’s peculiar blood and several GPS beacons that will help to follow the turtles trail after being released in the sea. “All these devices work towards the same goal: to better understand this fascinating animal’s biology”, explains Julien Pfyffer, the president and founder of the Octopus Foundation.

“Our July mission’s main objective is to see how this technology can be used to further our understanding of this particular species. The findings will be published in several media to better inform the public. Our articles will be made of texts, photos and videos so that mainstream media can share the collected information. This mission will also be the subject of a graphic journal, mainly focused on the marine animals’ behavior and the threats they are facing today. The graphic journal will follow both the Octopus Foundation team and the veterinary clinic team on their journey. Last but not least, we plan to make a 3D model of a marine turtle, and equip a specimen with a 360° camera. This promises to be a unique experience for the public who will be able to follow one of these turtles as if riding on its back”, Julien Pfyffer explains.

“Homerus was brought to us eight years ago, says Daniela Freggi. Never has a turtle been released after such a long convalescence. This particular turtle can only swim with its two front legs, since the two back ones are paralyzed. We wish to equip it with one of the beacons, so that we can follow and maybe understand its return to the open sea. If Homerus manages to survive out there, the collected data will help us to understand the life of this endangered species.” 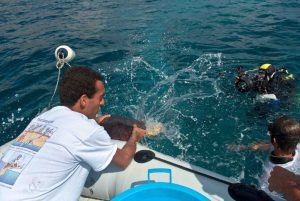 In the meantime, the veterinaries of the clinic will also power up the blood centrifuge financed by the Octopus Foundation. “Several tests are going to take place. We will finally be able to know if our patients have fully recovered after their stay in our clinic”, says the biologist.

Once the mission will be over, the Foundation’s team will work hard to bring all the information to the public. The focus will be put on the observation methods to better understand the turtles’ behavior, its biology, the threats they face and what solution exist to protect and nurse these amazing animals.