3D dive over an amphorae field

This article was initially published on the OCEAN71 Magazine‘s website. It explains why the crew of the Octopus Foundation chose the diving site of Niolon as a test field. At the bottom of the sea, in front of a beautiful little cove, dozens of ancient amphorae have become a popular tourist attraction.

They seem to have been lying in the exact same position for centuries, outlining the burial ground of an antique ship that sunk a long time ago in front of the Niolon cove, next to Marseille, in the South of France. Yet, these amphorae that interest the crew of the Octopus Foundation have been artificially laid on the seafloor in 2010. The pieces of pottery will have spent half a century on dry ground, before being submerged once again.

They were originally extracted from the bay of Marseille, between 1952 and 1957. They were all found on the very first underwater archaeological site in French waters, right next to the Grand Cougloué reef. At that time, two captains were supervising the operations. First, there was the famous Jacques-Yves Cousteau who when tired of diving, would follow the scuba divers’ progress with the help of the first waterproof camera. By his side was Fernand Benoît, in charge of the scientific supervision. “Back then, archaeologists weren’t divers yet” remembers Marine Jaouen, researcher at the Département des Recherches Archéologiques Subaquatiques et Sous-Marines (DRASSM).

In the following five years, Cousteau and his team would bring up around 7000 amphorae during their 1250 dives. The bounty was classified in two different groups. The scientists identified Greek pieces of pottery that could have come from Southern Italy and date back to the Third or Second Century BC. All the other amphorae seem more recent. The French archaeologist François Benoît explained this oddity: two different ships must have sunk at the same location, centuries apart. Decades after Benoît made this assumption, an underwater archaeologist by the name of Luc Long went back on the site and confirmed the theory.

What happened to the tons of relics brought up by Cousteau and his crew? “After identification and documentation, the most beautiful items were given to museums in Marseille and elsewhere” explains Marine Jaouen. But the DRASSM was left with a whole bunch of amphorae that were broken or of lesser importance. “When we moved our offices in 2009, we could not decide what to do with all these amphorae. Their maintenance is very costly. It happened during a time when the UNESCO started to emphasis on the importance of underwater heritage. Moreover, local scuba diving centers were supporting this project. It motivated the re-immersion of some of the amphorae on two different sites.”

The cove of Niolon was chosen as one of the sites, for obvious reasons that were explained to us by Marine Jaouen: “The diving site of the local UCPA (the national union for outdoor sports) is right above the cove. The immersion takes place in the bay, on a sandy surface with a depth of around 12 meters. Anybody can enjoy the site, from beginner divers to snorkelers.”

The project was a success. The scuba diving centers and the local media gave the action good publicity. Even if the aficionados of archaeological vestiges are the first people interested in the underwater site, they are not the only ones: “Marine biologists follow the site in order to monitor how quickly the underwater fauna colonizes the field of amphorae” notes Marine Jaouen.

Finally, the divers of the Octopus Foundation didn’t meet in the cove for the thrill of underwater tourism. Julien Pfyffer, the foundation’s director, explains the double objective of this field mission: “We are currently training our underwater team work. To model a submerged structure is not a task as straightforward as one could imagine. We had to develop a whole set of procedures. The site in front of the cove in Niolon was a perfect field test.”

The main aim of the Octopus Foundation is to grant the greater public a privileged access to the underwater world. No need for scuba diving skills: “With this 3D model of the field of amphorae, our motivation is to give access to a site that is otherwise rather hard to get to. We try to create new museographic spaces” concludes Julien Pfyffer.

Everybody can decide if it is a success, or not. 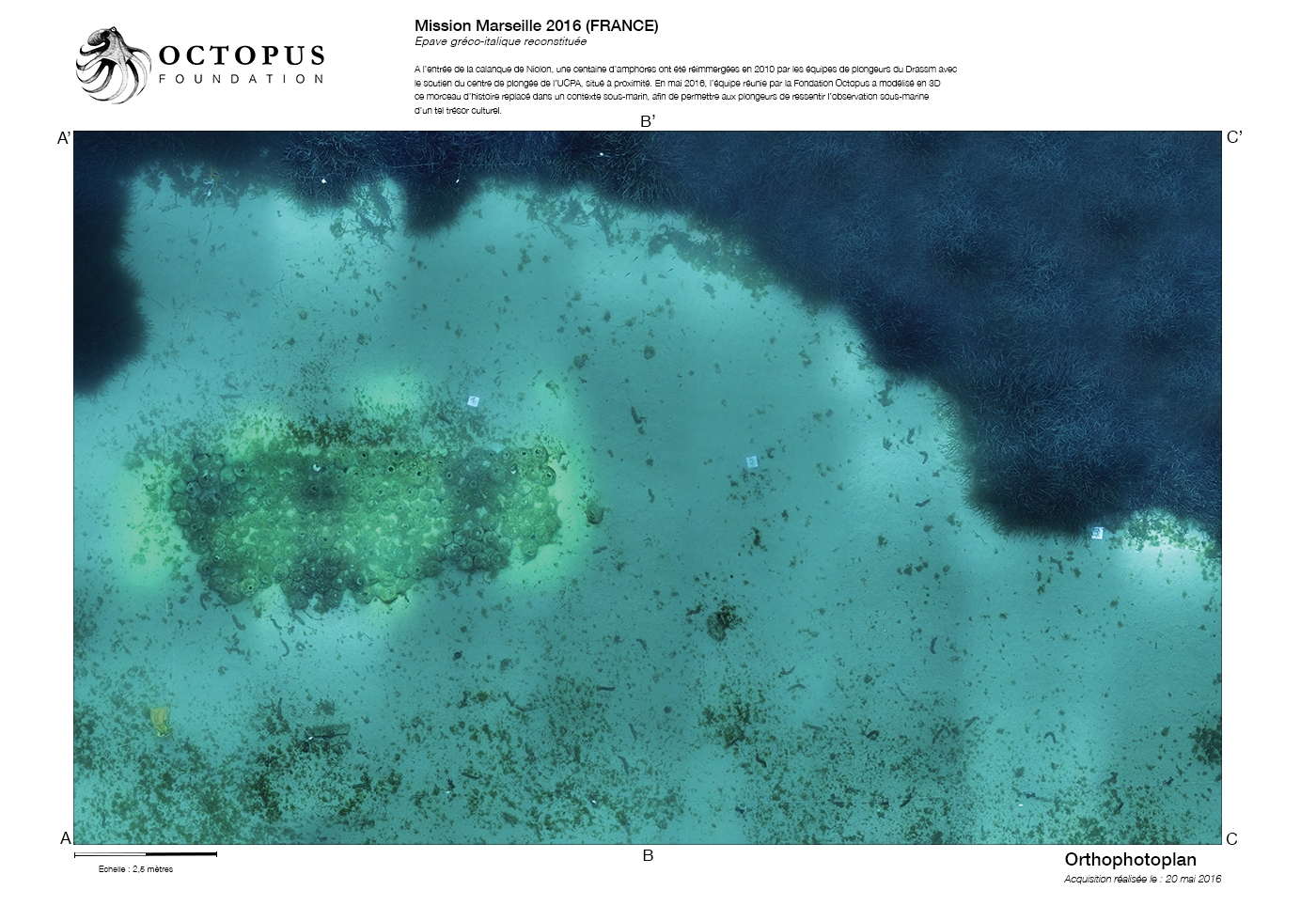